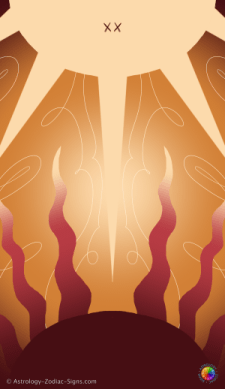 After all our challenges, fires, battles and inner struggles, the Judgement card comes to confirm that we are ready for an entirely new life story. It won’t announce an end, but the beginning, after the void came to be due to losses and emotions released in the past. It calls for action towards our mission, our heart's calling and the Divine intent that we already know is there. Faith isn’t lacking, but trust might be an issue to overcome in time, although there is no option of going back after this card has shown itself in a certain area of life. It may also speak of the person's fear that they will return to the same pattern or loop of behavior and choices, even though it is no longer possible with the knowledge and self-recognition they have found along the way. This is certainly a turning point, probably in every area of life if a general reading is in question, for the ended inner process has to reflect on all relationships and issues that we’ve always thought are the only, common manifestation. With our foundation of beliefs changed, we are ready to move down a different quest with different results to pursue than we ever thought possible.

The first thing to realize here is that one is done with the past and ready to move on into something new. The card of Judgement will often speak more loudly of our relationship with God, the Universe, and the higher purpose than the personal contact between two people. Still, it is good to have it around in a love reading for it shows decisiveness, initiative and a strong sexual impulse that is founded on stable emotional content. It shows unconditional love for Self, the purity of connection we are ready to give into, and shows that we are guided towards a certain person for a much bigger reason than we might think on our regular earthly planes.

Judgement tells us that it is time for an entirely different professional approach, maybe even an entirely different field of expertise. Opportunities that are currently open or those that are about to come knocking soon are important, life-changing, and potentially the summoning of your true authentic being within. One will be asked to help out, to support those in need, and to make progress that will aid the collective evolution through emotional contact or material support. An interesting turn might make everything different, bringing benefits that are both material and spiritual, as if the two have never been separated by the humankind in the first place. This is the point that brings promise of satisfaction even in the most tedious and tiring of matters as it prepares us for long-term commitments that we won’t have a reason to give up on as time goes by.

When Judgement shows up in a health reading, it requires special focus and attention for the person is ready to listen to the calling of their physiology as the greatest form on intelligence they have. Each problem that might arise has a much higher purpose, to show us the way, to show us where we need to work on the matter and how we feel deep inside about any issue that might arise. Using the body as a radar that recognizes much more in life than our brain ever might, all physical issues can be resolved from the point of awareness of the body. Health itself will gain a new dimension of understanding and perspective. In any form of negative setting, this card could show problems with eyes, ears and our senses, as the messages they receive aren’t interpreted right.

With Judgement reversed, lack of faith in oneself is obvious as the life's calling and our mission are unclear and not easy to spot. Insecure and used to being stagnant, we might miss some excellent opportunities if we resist the energetic course that comes naturally out of fear. It shows the lack of vision and clarity, one's mind turned to things that are too close and to narrow for their own Soul at the moment. It requires readiness to work on the Self with no outer influences whatsoever, so that the person can see clearly what they should do next. It is also a warning sign not to rush ourselves but to feel ready before jumping in.

Past - Judgement from the past puts us on a certain path that we are obviously following today for a reason, and gives confirmation for choices we have made until this moment in time. It is a peaceful setting that allows us to see how we have managed to handle some important things in life in the right way, and should reassure us when we fall into a state of self-doubt or when we are being tested by faith, authorities, or someone we find important.

Present - With this card here, our batteries are filled with a new energy and we are ready for a new chapter of our book to start. It shows how we need to fill up some space in our world that emptied as a consequence of energies released that became obsolete. It announces a new period in front of us that is an entirely new level of opportunity for a joyous existence than we have had a chance to find in the past, and reminds us that we are perfectly capable to jump into things that have been calling on us for a while.

Future - When set in the future, Judgement speaks of our spirit's liberation that is unquestionably at our doorstep, but it also points to the current state we are in as still “unready”. It shouldn’t be interpreted as the card of hope as much as a natural obligation to follow. It will lift our spirits and our Soul high with no serious obstacles in the way for as long as our energy levels are high. This position makes things simpler today, as it becomes obvious that certain troubling and dark matters we are going through have a much bigger reason to happen to us than we might have seen by now.

The card of absolution, it traditionally showed Christian Resurrection as all the people and children in the card are naked before God and facing upwards to hear His calling. Variations to the topic came as the sea was added to give up its dead (Revelation 20:30). Mountains covered in snow were added over time to fill the symbolism and show that each individual has their personal goal and boundaries that are to be respected, requiring solitude to understand the calling. When Thoth tarot deck came to be, this card got the name Aeon to refer more obviously to the New Age and the new phase of life that is entirely different than our past. Darkana deck named it Prudence to show it belongs with the four cardinal virtues, along with fortitude, justice and temperance.